From Wikipedia, the free encyclopedia
For other uses, see Ring of Fire (disambiguation).

The Pacific Ring of Fire 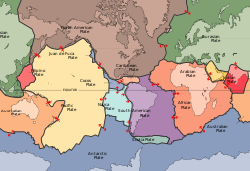 Tectonic plates of the world

The Ring of Fire is an area in the basin of the Pacific Ocean where a large number of earthquakes and volcanic eruptions occur. In a 40,000 km (25,000 mi) horseshoe shape, it is associated with a nearly continuous series of oceanic trenches, volcanic arcs, and volcanic belts and/or plate movements. It has 452 volcanoes (more than 75% of the world’s active and dormant volcanoes).[1] The Ring of Fire is sometimes called the circum-Pacific belt.

All but 3 of the world’s 25 largest volcanic eruptions of the last 11,700 years occurred at volcanoes in the Ring of Fire.[6]

It is a direct result of plate tectonics and the movement and collisions of lithospheric plates.[7] The eastern section of the ring is the result of the Nazca Plate and the Cocos Plate being subducted beneath the westward moving South American Plate. The Cocos Plate is being subducted beneath the Caribbean Plate, in Central America. A portion of the Pacific Plate along with the small Juan de Fuca Plate are being subducted beneath the North American Plate. Along the northern portion, the northwestward-moving Pacific plate is being subducted beneath the Aleutian Islands arc. Farther west, the Pacific plate is being subducted along the Kamchatka Peninsula arcs on south past Japan. The southern portion is more complex, with a number of smaller tectonic plates in collision with the Pacific plate from the Mariana Islands, the Philippines, Bougainville, Tonga, and New Zealand; this portion excludes Australia, since it lies in the center of its tectonic plate. Indonesia lies between the Ring of Fire along the northeastern islands adjacent to and including New Guinea and the Alpide belt along the south and west from Sumatra, Java, Bali, Flores, and Timor. The famous and very active San Andreas Fault zone of California is a transform fault which offsets a portion of the East Pacific Rise under southwestern United States and Mexico. The motion of the fault generates numerous small earthquakes, at multiple times a day, most of which are too small to be felt.[8][9] The active Queen Charlotte Fault on the west coast of the Haida Gwaii, British Columbia, Canada, has generated three large earthquakes during the 20th century: a magnitude 7 event in 1929; a magnitude 8.1 in 1949 (Canada’s largest recorded earthquake); and a magnitude 7.4 in 1970.[10]

The country of Bolivia hosts numerous active and extinct volcanoes across its territory. The active volcanoes are located in western Bolivia where they make up the Cordillera Occidental, the western limit of the Altiplano plateau. Many of the active volcanoes are international mountains shared with Chile. All Cenozoic volcanoes of Bolivia are part of the Central Volcanic Zone (CVZ) of the Andean Volcanic Belt that results due to processes involved in the subduction of the Nazca Plate under the South American Plate. The Central Volcanic Zone is a major upper Cenozoic volcanic province.[11]Apart from Andean volcanoes, the geology of Bolivia host the remants of ancient volcanoes around the Precambrian Guaporé Shield in the eastern part of the country.